Sara Caplan is a criminal defense attorney, and she also handles immigration matters. She was Of Counsel to Christensen, Miller, Fink, Jacobs, Glaser, Weil & Shapiro from 1995 to 2006, and before that had her own office and worked with Robert Shapiro, including representation of OJ Simpson and other well known celebrities athletes and musicians. She is a litigation attorney specializing in criminal defense (state and federal), professional administrative hearings (such as medical, dental, nursing, and real estate boards) and immigration matters. 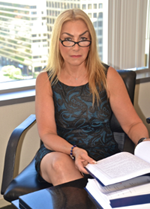 Today, I proudly enjoyed one of the most rewarding experiences of my entire 29 years of practicing law. After 8 years of very intense and difficult litigation with the U.S. Government, my client, who is a homosexual, ethnic Chinese and Christian man of Indonesian nationality was granted the right to remain in the United States on a grant of Withholding of Removal under the U.S Immigration and Nationality Act.

Indonesia is the largest Muslim country in the world, and its government is Muslim. In 2008, its President enacted an Anti-Pornography Act, which made homosexuality illegal and subject to 8 years imprisonment and 100 lashings. It gives private citizens the right to take property from and punish people they suspect are in violation. Many areas of the nation impose Sharia, or strict Muslim religious law. Homosexuality is disdained in Indonesia.

When I first met my client 8 years ago, in 2004, his claim for asylum had been denied by a now-retired Immigration Judge who forced him to conduct a trial on his own, without an attorney present, knowing he barely spoke English. In reviewing the transcripts and documents in his case which began in 2000, I determined that his previous counsel failed to assist him in obtaining the necessary information and documentation to prevail in his claim, and it was not clear why he did not show up for his scheduled trial. Also, his appellate legal aid counsel filed an appeal that missed all the important issues. The appeal was also denied by the Board of Immigration Appeals.

In 2004, I filed an extensive Motion for Reconsideration and to Reopen after helping the client obtain documentation from his family in Indonesia. We established that in the 1960's his entire family was forced to obtain a judicial Order of Name Change from an ethnic Chinese name to an Indonesian name. He also had an original Baptism Certificate regarding his birth date and documents from the church he attends in this country establishing his Christian faith. We established that he would most likely prevail if the case were reopened, that he had ineffective assistance of counsel at the trial and appellate level and that his constitutional due process rights to a fair trial were violated by the requirement that he conduct his own trial without his counsel present.

In 2005, my client's case was reopened by the Board of Immigration Appeals and remanded to the Los Angeles Immigration Court for new proceedings. We filed a new Application for Asylum or in the Alternative Withholding of Removal (INS Form I-589) and also requested relief under the Torture Convention of the United Nations. We filed Supplemental documentation in Immigration Court over and over documenting his Chinese ethnicity, Christian religious background and articles from the U.S. Department of State, Amnesty International and other human rights organizations detailing the brutal manner in which Chinese, Christians and homosexuals have been treated historically, and still are treated in Indonesia.

It is not clear to me why the Government spent so much time and effort challenging every little point and issue. The Government even tried to have the Court Order whom I could use as an expert witness on Indonesian country conditions for persons in my clients circumstances. The Government's position was that a local neuro-linguistic professor, who wrote some articles about the development of a slang language used by homosexuals in Jakarta was the most qualified and only expert that should be permitted to testify. He had no background in the socio-cultural or political history of Indonesia or any of its vast regions and some of his own articles expressed the horrible persecution suffered by homosexuals in Indonesia. I prevailed in being able to proffer the testimony of Dr. Elmo St. Nauman, a retired U.S. Department of Justice Asylum Officer, with several doctorate degrees, extensive military, academic and research experience. He studied, went on numerous fact finding missions, and wrote numerous articles and treatises on the social, cultural and political history of Indonesia. Dr. Nauman was the only witness at the Merits Hearing. His testimony established that Indonesia's ethnic Chinese minority had long suffered a history of abuse and mistreatment by the native Indonesian majority; that the Christian minority has long been a disfavored group and there are still continued violent attacks and burnings of Christian churches; and that as a homosexual, there was more than a reasonable possibility that my client would be singled out individually for persecution, which he had already suffered by being grabbed, taunted, kicked and severely beaten several times simply because he is gay.

My client did not win his Asylum claim because he could not establish that he applied for this relief within 1 year from the date of his entry into the United States. There is a one year rule for all political asylum applicant to file their claim for political asylum in this country within one year of entering the United Sates. However, the Assistant Chief Counsel for the Government finally offered to stipulate today that he be granted Withholding of Removal to resolve this case. In deciding to accept this stipulation, my recent research indicated that there were several recent cases pending in Immigration courts around the country in which homosexuals from Indonesia were ordered deported back to Indonesia.

The Immigration Judge agreed with our Stipulation, and today, my client can live and work in this country without the fear of being deported to a country where he will be subjected to persecution and possible torture and death simply because of his ethnicity, religion and sexuality.

I am extremely happy for him and his family and I wish them the best of luck in this country.

I am very honored to be able to participate in a process that our country provides to people who have suffered under cruel and repressive regimes in other parts of the world . I am very proud to be an American.